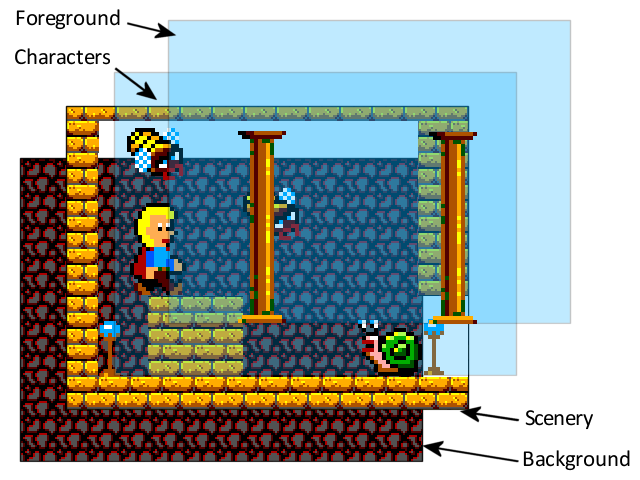 How do you create rich animations over a background, on a computer that doesn’t offer much in terms of hardware video features? First, let’s have a look at what the Coco3 offers you that not all 8-bit computers do:

My game is not using ALL of these hardware features. For instance, I don’t need any horizontal or vertical scrolling… except maybe when I will implement cool transitions between levels! Most of my optimizations are implemented as software. With a 6809 running at 1.7MHz, you really have to be careful what you’re asking the CPU to do. The Coco3 lacks the following features:

One of the fundamental features of any video game is how graphical items stack up on the screen. Some simpler games use a black or single-color background, so moving a sprite or character around only requires to erase its edge to avoid leaving a trail.

Try to animate characters over a non-trivial but static background and you end up having two layers:

For Kaboomerang Kim, the solution I have chosen to use mostly Option 2. Some of the scenery is merged with the background, while the animated items are rendering prior to rendering characters. Animated items don’t require super fast animation (since they don’t move around) so I update them in a round-robin fashion: one item per redraw cycle. This saves lots of CPU. And I might implement Option 3 for super cool background animation effects, but this will require quad-buffering (holy cow!), an arcane concept which I will cover in another post!

Finally, some games use a foreground layer, which is populated with scenery that goes in front of the character, enemies and projectiles. This foreground layer can be implemented using many techniques:

I am currently working on the Foreground layer so I have not settled for one of these 3 options yet. They’re all interesting, though the first option (redraw at every cycle) imposes limitations that might prove to be unacceptable if I want to design varied and interesting levels.

So this is how layers stack up in Kaboomerang Kim. Programming a video game is not as simple as it might initially seem, especially on a 8-bit computer with limited graphical capabilities. In the end, what matters is that it looks good, is animated nicely, and is fun to play.

I haven’t posted anything for a while because I was refactoring my code and working on other projects. But I’m back and I will soon post some new videos and stuff! Gotta fill this Coco3’s 512kb with loads of compiled sprites and tiles and animations, until it goes…

I have benchmarked the sprite compiler I’ve recently programmed. For 10 000 renderings of a 16×16 sprite with some transparency (I’d say it’s a “reference” case), I’ve got the following results:
– Rendering using a transparency mask table: 44 seconds
– Rendering using a compiled sprite: 10 seconds
That’s pretty impressive. I’ll be able to free up lots of CPU cycles now. And I’m working on even faster compiled sprites!

Yup, due to my hectic workload I can’t make it to CocoFest this year… again. So I’m posting the picture of a heron that I’ve dithered with my checkerboard algorithm. So long, Heron Point Convention Center! 😦

To make a great game you need great tools, and I have been working on a dithering algorithm for quite a while. I have just programmed an image converter that attempts to select the best 16-colors palette for an image. It uses both solid and checkered colors, with constraints on which colors can be paired.

How does it work? I expand the 64-colors EGA palette to (64×65)/2=2080 virtual colors. Each virtual color is represented either by a solid color or by 2 checkered colors. The resolution doesn’t change (it is not divided by two), it’s like painting a picture using a magic checkered paintbrush. ThenI count the virtual colors in the image, build histograms, and keep the 16 most useful “pure EGA” colors (a checkered color has 0.5 of each color, a solid color has 1.0). It works surprisingly well. The palette selection, checkerboard dithering and RLE encoding worked without a hitch.

These tools will be useful to build background images and splash/menu screens.

Game update! With some help from Simon, I have started making the code faster and better. Lots of functions were “naive implementations” that I had programmed to optimize later. I am a strong believer in “quick and dirty” code that, if programmed smartly, can then be improved. Now we have many enemies on the screen and, even though the animation is still a bit clunky, there isn’t any massive slowdown anymore. This test screen has 4 moving enemies, 3 animated items, and 3 blocks which can be triggered. And there’s still room for more. Collision detection with enemies and lethal blocks is now real; watch the video to see Kim get roasted over a flame. No dying animation yet, just the screen border turning to red. Oh, and there’s the new enemy, the Slimy Snail. Enjoy!

So after adding the first enemies, I have reached the point where I need to start optimizing my code, both globally and locally. Hopefully Simon Jonassen is helping me with that. Here’s a short video showing the slowdown with 3 medium-sized enemies and 3 animated items. These enemies are called the Baffle Bees and will eventually be a bit more animated and aggressive. They currently use a “coordinates box” and bounce inside its limits.

Coco3 game dev / An adventure in retro-computing
Blog at WordPress.com.